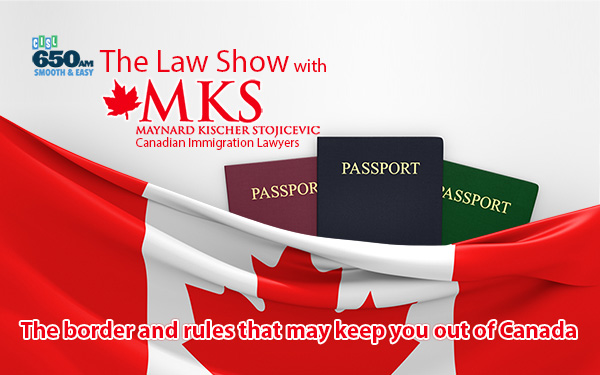 Continuing the conversation on the Canadian Border Services Agency (CBSA) and how things work at the border, Maynard Kischer Stojicevic partners Alex Stojicevic and Gordon Maynard  once again joined host Zack Spencer of CISL 650’s The Law Show to address questions of enforcement issues at the border.

Along with other government bodies, the CBSA has the power to decide whether a person can come into Canada or not. Sometimes, people are found to be inadmissible, for a variety of reasons.

“Inadmissibility doesn’t mean what you think it means,” says Gordon. “When people hear the word inadmissibility, they think people who aren’t allowed into Canada. But, inadmissibility is a word that means, anything that can be used to stop you from coming in. It can mean foreigners, but it also means people who are in Canada. It’s a grounds by which CBSA can say, ‘we’re taking away your status, we’re going to require you to leave Canada.’”

When the previous government brought in the Faster Removal of Foreign Criminals Act, people, even permanent residents, lost their right to appeal if they committed a crime for which they received a sentence 6 months or longer, a change for the previous two-year sentence rules.

“When the government changed this from a two-year rule to a six-month rule, they misrepresented to the Canadian public what the effect and the purpose of this legislation was,” says Gordon. “They mis-cast prior cases where they claimed permanent residents had abused the system. That’s simply not true. The system worked very well. What happened before was that the government screwed up.”

“The government has always tried to use this type of legislation, for the past 20 years, to give themselves the ability to remove people to avoid embarrassment.” says Alex.

Residency rules can also cause problems for some permanent residents, as they require a person resides in Canada for a minimum of 730 days over five years.

“You feel for some people. Some people have their businesses based here and they are trying to stay within that 730 days, but at the same time, international business is such that they need to go and travel” says Alex. “They’re always in danger of going a few more days this way or that way and you may violate the rules.”

Along with committing a crime or not being in the country for the required amount of time, misrepresenting oneself on application documents can be cause for inadmissibility, even if it is not intentional.

“The consequences of being dishonest and being caught misrepresenting are really, really high,” says Alex. “As a result, it pays to be prepared, as early, as possible, before you come to Canada.”

“Bottom line is, there’s pretty much no statute of limitations on inadmissibilities,” says Gordon.

“Once you’re guilty of an inadmissibility, it’s there and it can be brought against you 15 minutes from now or 20 years from now.”

The experts at MKS Immigration and Citizenship Law can help you, your family, or your employees, prepare to immigrate to Canada or provide more information on rules such inadmissibility, residency and misrepresentation.