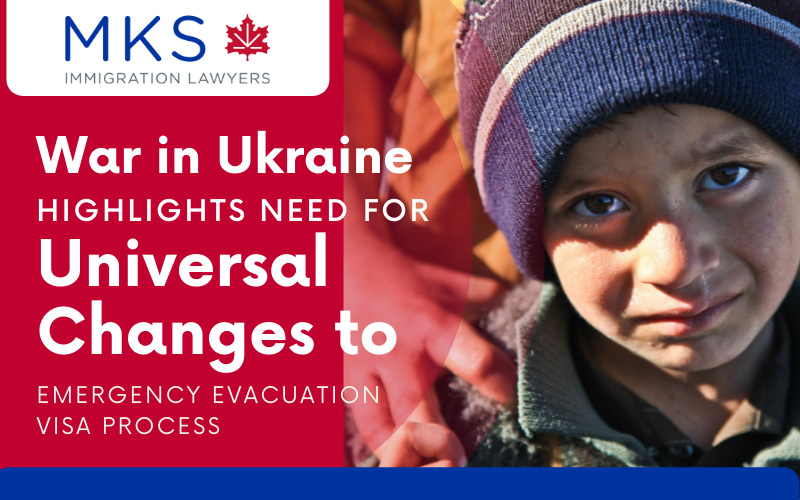 For refugees who find themselves displaced and in need of a safe place to stay in another country due to war, the process to get an Emegency Evacuation Visa should be uncomplicated and free from bureaucratic hurdles.

The ongoing war in Ukraine is another example of the need for the adoption of the International Bar Association’s (IBA) propoposal for Emergency Evacuation Visas first put forward in 2019 according to Alex Stojicevic, Refugee Officer of the IBA Immigration and Nationality Law Committee and managing partner of MKS Lawyers in Vancouver.

“In emergency situations where people’s lives are directly at risk, you bring a multilateral, multi-organisational approach to first get people out of a dangerous situation into a safer one, and then triage them with the entire range of multilateral, multinational, complementary pathways to both refugee protection and immigration and try to match them as best you can,” said Stojicevic about the IBA’s Emergency Evacuation Visa proposal.

The path forward to a universal Emergency Evacuation Visa Process

While some countries including Canada and Poland have taken action to delay time-consuming bureaucratic processes to provide immediate support to Ukrainian refugees, other regions in Western Europe have made it difficult for Ukrainians to cross borders. The UK has also not waived visa requirements for people fleeing Ukraine and is facing resulting criticism.

Bureaucratic roadblocks in the United States are also holding up Emergency Evacuation Visa processes for Ukrainians and emphasizing the ongoing issue with around 40,000 Afghans who are still waiting on humanitarian parole applications since August. This range of  international approaches demonstrates the need for a more unified Emergency Evacuation Visa process for refugees.

“The better approach would have been if this was done coherently and multilaterally,” said Stojicevic. “If we had had something in place where resources could be pooled on the understanding that everybody would participate that could – in terms of moving and accepting people – and with the full complement of processes and pathways, then you would have had a more coherent international response.”

While there are some barriers to overcome, like international treaties on biometric identification, Stojicevic is optimistic innovative mobile biometric testing stations will provide solutions to identification concerns.

On the need for a coordinated international approach, Greg Siskind, Vice-Chair of the IBA Immigration and Nationality Law Committee and a founding partner at Siskind Susser in Memphis agrees, stating “to the extent nations work together and have a more coordinated approach, that is the way ultimately to help people as quickly as possible.”

Aleksandar Stojicevic (Alex) is one of the most well-known and respected practicing immigration lawyers in Canada. He is the founding and managing partner at MKS Lawyers. Alex, who has 24 years of experience in the field, holds a law degree from the University of British Columbia and a bachelor of arts degree with honors in political science from the University of Calgary.