The BCPNP, foreign workers and Minister McCallum vs. the bureaucrats 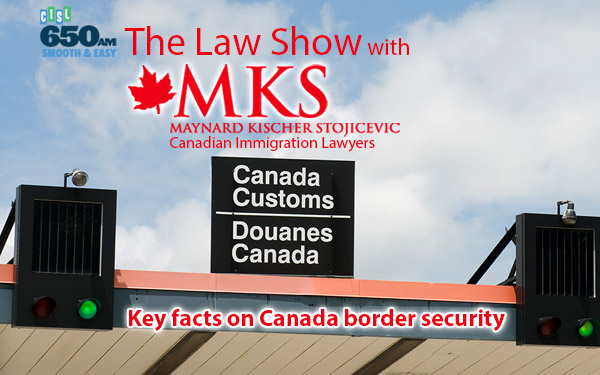 With the popularity of the television show Border Security putting a spotlight on the Canada Border Services Agency (CBSA), Maynard Kischer Stojicevic partners Alex Stojicevic and Gordon Maynard  spoke to host Zack Spencer of CISL 650’s The Law Show about how border services have changed and what rights people have when crossing the border.

CBSA is tasked with determining who has the right to enter Canada, who may be authorized to enter and who shall be denied entry.

“Citizenship and immigration used to have a right hand and a left hand. The right hand would bring people in and the left hand would throw them out. So they handled both facilitation and enforcement,” explains Gordon. “But when you took the enforcement people out of CIC and put them into CBSA, you created a culture that was only enforcement-minded.”

“Bottom line, if you go down to the border and you have issues there, things can happen,” says Gordon. “They have authorities that just don’t exist in other places.”

“When people travel to a border, they don’t have a reasonable expectation of privacy. They know that when they come to the border and they’re carrying luggage, both their purpose in entering Canada and what they’re bringing into Canada is subject to examination,” says Gordon.

Some people may not be aware that CBSA agents may even have the right to go through cell phones and personal computers.

“The border finds that going through cell phones and computers can be incredibly fruitful. They can gather a lot of information,” says Gordon.

“The challenge is, the statute that gives them the authority to do this is broadly worded to allow them to investigate almost anything within the parameters of determining purpose of your entry into Canada,” says Alex.

Because lying to border security or not declaring items, especially those on the customs list, can have serious consequences, the best thing to do at the border is tell the truth.

“Make sure that you declare things you’re bringing in. You’re much better off declaring, even if you’re not sure that you should, and dealing with that problem later than saying that you don’t have something if it turns out later that you do,” says Alex. “The risk of a false declaration is very, very heavy.”

Visit MKS Immigration and Citizenship Law  for more on what you need to know when crossing the border and other citizenship and immigration needs.