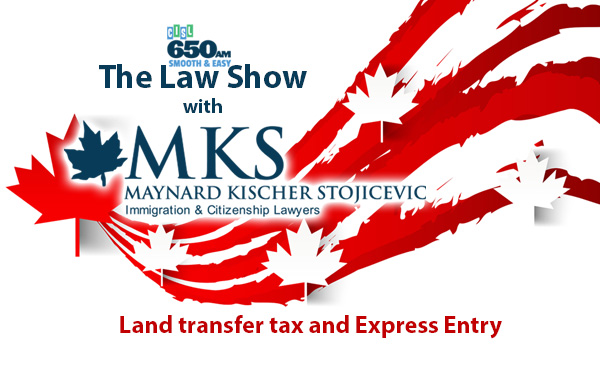 A year and a half after introducing the express entry program, the federal government is now looking at ways the program can be improved.  Maynard Kischer Stojicevic partners Rudolf Kischer and Gordon Maynard  spoke to host Zack Spencer of CISL 650’s The Law Show about the history of the program and what changes may be on the horizon.

But first, the partners addressed an issue that’s recently been front-page news in British Columbia: the land transfer tax introduced by the provincial Liberals to quell concerns about soaring house prices — and aimed at non-permanent residents.

“I think it’s a broad hammer,” says Rudolf.  “We’re really affecting some people that are paying their fair share, that are living in Canada…are working in our economy and all of a sudden we’re treating them differently on the sole issue of their nationality.  I don’t think that’s right.”

Giving a brief history of the express entry program for economic immigrants, Gordon explains how the program shifted the backlog by introducing a new way of dealing with applications.

“It was actually quite clever,” says Gordon.   “They made a rule that said nobody can file an application. They say first you have to jump into the express entry pool.  From that pool, they’re going to select people and give them an invitation to apply.”

The federal government is now looking at how it may improve the express entry program, with some focus being paid to how much of a role Labour Market Impact Assessments (LMIAs) should play in determining eligibility.

“What matters is, are we getting the best for Canada?  We should be getting the best applicants and I don’t think we are,” says Rudolf.  “I think the government sometimes underestimates that you have people from all over the world that would love to move to Canada.  We have no shortage of applicants.”

Another change being considered is awarding eligibility points to those who have siblings already in the country.

“I think it’s a votes thing,” says Rudolf.  “The history is that the people that you let in tend to vote for you and if they’re seeing people in their riding saying I want to get my sister in, they’re going to look for the economic reason to try and justify it, whether there’s a strong one or not.”

Gordon notes he’s open to new ideas to address problems in the system.

“The express entry system needed fixing.  I like the idea of trying different approaches to try and push prod different categories of people into selection and reduce others.  I think the system needs to be complex like that to get the right mix,” he says.

For more information on the express entry system or any other citizenship and immigration needs, visit MKS Immigration and Citizenship Law .