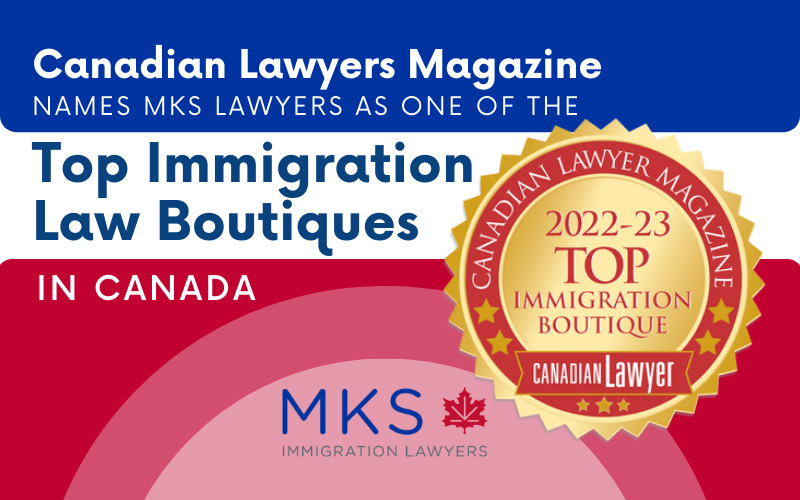 We are honored to announce that MKS has been named one of the top immigration law boutiques in Canada! This is a wonderful honor that we graciously accept. After two decades of hard work, this honor means a lot to everyone at MKS on both a professional and personal level.

Canadian Lawyer Magazine has been in publication since 1977, and since its launch, has made it a goal to bring hard-hitting, unbiased journalism to its readers.  Focusing on both practice and profession, it informs and inspires people in all areas of law, who consider it a “must-read”. It has a diverse view point, as it consults with people in all areas of law, across the country.

Recently, Canadian Law Magazine spoke with MKS’ own Aleksandar Stojicevic (Alex) about the award, and with pride, he recognized that MKS is an “increasingly rare animal” – a full-service immigration law boutique.  “There are not many boutiques out there these days that are like our firm, firms that handle cases ranging from refugee claims to corporate work and everything in between.”

It is also a source of pride that MKS’ staff has a combined fluency in ten different languages, including Mandarin, Hindi, Serbo-Croatian, Spanish, Punjabi, German, and Portuguese. The field of immigration law is very gratifying for Alex and his staff, as they are helping countless people who are “making a huge leap of faith leaving their home countries and coming to a new one”.

Alex and his team make it a point to have a “highly personal” touch, which only a boutique like MKS can provide. “For lawyers, a client is one of many they will deal with in a day, but for that client, their immigration lawyer is likely one of the most important people in their life, the one that will help pave the way to a new life in Canada or find the skilled employee that they really need.”

During the pandemic, MKS’ direct and kind approach to immigration law came in handy…

The COVID pandemic has delayed immigration in countless ways, such as tedious travel disrupting the plans of people wishing to come to Canada as permanent residents, uncertain travel advisories and strict rules for leaving and entering the country, or difficult situations faced by employers trying to fill labor gaps with international employees. For many sectors, it has been a challenging couple of years and immigration law was no exception!

With the conflicts happening around the world, many people have had to flee their homes, becoming refugees and seeking solace in Canada.  Syria, Afghanistan, and Ukraine were three of the most notable areas that law boutiques assisted during this time.  It has been a busy but rewarding time for us.  And while the pandemic has slowed down, immigration law is still as lively as ever.

Alex notes that the trendline for immigration to Canada is good, with limits increasing every year, though perhaps not as much as they should reflect the actual need for immigrants in society and in the economy.

The pandemic and dangerous situations around the world created a significant application backlog, which the Canadian government has promised to alleviate. Other factors such as how the government dealt with the pandemic, the lack of workers available to process applications, and travel restrictions attributed to the large backlog and long wait times.

There is a silver lining, however.  Due to the pandemic, the immigration process has relied heavily on technology and many of the steps are able to be completed remotely.  This introduction of technology to the process has made things much easier for immigrants.  However, it has contributed to the backlog when things don’t work as planned.

A Hopeful Future for MKS Immigration Lawyers and Clients

Despite the challenges facing MKS during this busy time, we continue to help many people begin the process to become Canadian residents.  We are proud to be named one of the top immigration law firms by Canadian Lawyer Magazine and are looking forward to helping many more people achieve their dreams of coming to Canada to work, build a family, go to school, and settle.

Do you have an inquiry about the immigration process? MSK can help! Click here to fill out a consultation form.