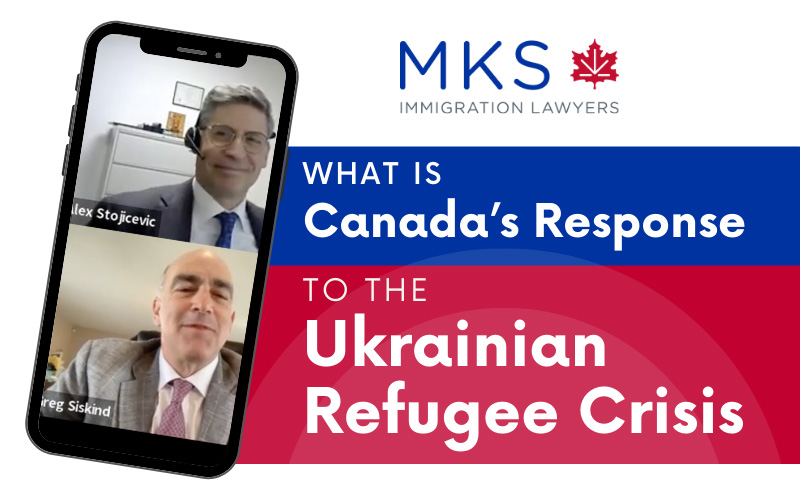 On March 21, 2022, MKS’ own Alex Stojicevic participated in a webinar presented by the IBA Immigration and Nationality Law Committee, discussing the global response to the Ukraine refugee crisis.

Participants in the webinar:

Aleksandar Stojicevic (Alex) is one of the most well-known and respected practicing immigration lawyers in Canada. He is the founding and managing partner at MKS Lawyers. Alex, who has 24 years of experience in the field, holds a law degree from the University of British Columbia and a bachelor of arts degree with honors in political science from the University of Calgary.

Canada has already welcomed quite a few Ukrainian residents to Canada, Alex stated, “We had an existing population of students and workers from Ukraine, so we already had 20,000 people here, so that’s normally how many temporary residents we would have from Ukraine. 6100 visas have been issued in the last 30 days (under normal visa processing that was accelerated), and those people have largely arrived”.

Since then, Canada has announced a large-scale program and has mobilized community-based organizations across the country. The program has received a big buy-in from larger provinces that have substantial populations, to allow any Ukraine resident who wants a visa, to only wait for 14 business days of processing.

How is Canada assisting during the Ukrainian Refugee Crisis?

As the refugee officer of the immigration Nationality committee, Alex says they have been using the Emergency Evacuation Visa as a tool, “This Canadian program is very similar, as it’s rolled out essentially as a measure to bring people to a place of safety from where they are, allow them to come, and then give them a complementary suite of services available to them on the asylum side, understanding that people may want to go back”.

The Canadian government has also relaxed Canada’s vaccine requirements to allow people that have not been vaccinated to come to Canada and not have to quarantine as a result.  Canada is hoping to welcome between 150-180000 people during the Ukrainian conflict, and although Alex admits this is ambitious, he states that it’s just for temporary purposes.

He also notes that Ukrainian-Canadian and governmental organizations have come forward with plans to house people.  And in cities like Vancouver, housing is short supply, ”but nevertheless, there’s enormous goodwill here to try to do something to help as many people as possible”.

In response to the concern that the processing of Ukrainian refugees may not happen in a timely manner, Alex said that he is seeing evidence that the Canadian government is holding true to its promises and processing applications quickly. The dedicated service channel just for Ukrainian applications, the waiving of fees so they can skip that processing step, and the fact that they have placed team members throughout Europe to work on the new emergency travel protocol is helping to streamline the process for Ukrainian refugees who need to come to Canada now.

For the closing question of the webinar, Greg asks the speakers about Russian Nationals who are upset with the circumstances in Ukraine and do not want to return to the country for fear of their safety but have had their funds and tuition cut off.  Since the majority of speakers at the webinar are lawyers, he wants to know what types of situations they have been seeing in their line of work.

Alex expresses that he has seen Russian residents not being able to send money to relatives via Apple pay or wire transfer, and many being afraid to go back to their home country due to the conflict. “We are seeing students applying for what’s called a sort of a work permit and open work permit for vulnerable workers and for example, the University of British Columbia is waiving tuition for certain Russian Students, particularly at the grad school level”. In addition, there’s a movement afoot to change the rule that you can only work part-time on your work permit to make it so that they can work an unlimited number of hours which will help them.

Luckily, Canada is a country that is attempting to help as many people as possible who are suffering during this conflict.  And MKS Immigration Lawyers can help as well, if you have questions regarding the programs available for immigration, including any regarding Ukraine, please fill out a consultation form, here.